How to Get a Girl Out of Your League

Is She Too Good for You?

You want the girl of your dreams, right? That amazing woman who just seems to get you and surprises you every day with how fricken awesome-sauce she is, right? She’s gorgeous and smart, and she has her “poop in a group”—her shit’s together, man—and loves sex. Well, dude, if that’s true, you’ve probably wondered … How to get a girl out of your league, right?.

In last week’s blog, I mentioned that I’d recently worked with a guy who was interested in a girl who he thought was out of his league—way younger, professional model, super nice chick—well, we’ll get to how that story unfolded in a bit, but first …

Yup, some chicks are going to be out of your league. #damnbaby

Unless you’re Brad Pitt or The Gerry (Gerard Butler, star of 300)—which you prolly ain’t if you is here, Bae—then there’s some work you’ve got to do on yourself to up your “dateability score.”

The Jessica’s of the world have standards, but more important, they’ve got options.

You can up your dateability score and get a “better” girl by changing some things about you—the things that are actually changeable.

You can change your—

You can’t change your—

But, I’ll tell you something about how you can get more something-something: If you change your attitude, it’ll help fix all the stuff you can change.

You don’t want every chick who’s out of your league.

You may not even want the chick you think you want who you think is out of your league.

Here’s what happened for my client …

Before he met the babe in question, he and I went on a “mock date” (see coaching services).

He got positive feedback and what-to-do-different-dude (and why) feedback.

He got a date with She’s Outta My League … and rocked that date, MOFOs!

I text coached him through some insecurities and gave him #JustTheTip texting suggestions and feedback. (Again, with “why say this and not this.”)

He’s a smart guy and a quick learner.

Two weeks in, and a few dates later, he’s at the sleep-over stage. 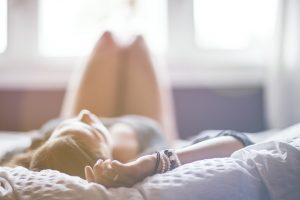 HE decided she wasn’t the right gal for him, and since he’s looking for his Mrs. Forever, he cut her loose―the girl who, in his mind only two weeks ago, was out of his league.

By the way, I don’t influence guy’s choices, but I do ask questions that make them think about their true needs, values and goals. In this case, I agreed with his decision. She wasn’t out of his league, but she also wasn’t the one.

How to Get a Girl Out of Your League Actionables

p.s. Have you downloaded my INSTANT CONFIDENCE “TALK TO HER” TECHNIQUE? Dooo it.
p.p.s. Wanna get the step-by-step system to skyrocket your dateability score? Click here.