Narcissistic Women in Their 30s & Up (Video added!)

Dealing with Narcissistic Women in Their 30s+

Question from a WakeUP2Luv grad basically about narcissistic women in their 30s, 40s and 50s. (How to get your Q answered at end of post.)

Fed Up with Narcissistic Women in Their 40s and 50s

I’m over 50 and back when I was dating in my 20’s & 30’s — prior to smart phones & social media — attractive women who were male attention seekers and teases were frowned upon and disliked… almost shunned.

Nowadays, after my being married and divorced, I’m dating again and notice that attractive women over 40 (and some even over 50) are big time attention seekers, users and teasers.

I feel like they are saying, “I’m older and still got it so I can treat men however I want!”

For me it’s very discouraging.

In fact, I have had actual discussions with these women that tell me outright they only want attractive younger guys… the rest are just friends.

So… my question is… is there a way for me to politely deal with these type of egotistical women and pique their interest in me as well as avoid the friend zone or just give up and walk away.

I ask because this is becoming commonplace around here these days.

Anna’s Take on Narcissistic Women in Their 40s and 50s

I encourage men to walk away but! —

Respectfully and carefully provide feedback to narcissistic women in their 40s and 50s — and any age above or below that range — as to why you’re walking away.

Or it takes a lot longer than necessary.

Or it never happens. At all.

That’s not a win-win for anyone. It’s not even a win for one side. 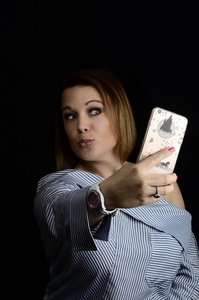 And if these narcissistic women in their 40s and 50s are successful with their philosophy you’re not going to change their minds, anyway.

Why would they, they’re getting what they want!

Better question: Why do you want them?

If you’re lonely or desperate, you’re still not going to get them or on the off-chance you do they’ll use you and leave you when someone “better” comes along.

Do you think they’re the only attractive ones out there?

If so, then you’re shopping in the wrong places and/or you’re not giving the 6.5 Janes a chance.

Hint: With any woman who treats you like a king, especially sexually, you’re going to experience her attractiveness go up a point or two.

Why the Rise in Narcissistic Women is Happening

Women have been told to embrace their sexuality, claim their boldness and take what they want.

Essentially, women have been brainwashed by feminism to believe that acting masculine will make them happy.

For some women, feminism has worked as suggested.

In my opinion, I’ll bet that lesbians feel they have benefited the most.

Yes, I am aware that statement is not PC. F’ck PC!

But there are also plenty of straight women who think they’re happier because of feminism even though they’re really not.

There’s an internal conflict between social expectation and biological inclination that has many decent naturally feminine women subconsciously befuddled.

I’d have to go into a book-length answer to provide the details for why feminism has fooled women into acting like fools, but suffice it to say even good women are confused.

There are Good Women Out There

Good women exist but they’re not the ones on social media puckering and pouting through filler-filled lips and posting a new selfie every day.

I don’t use social media for personal use and I’m not the only one amongst my female friends.

And of the ones who do use social media, only one of them publishes look-at-me-like-my-pic posts, but I cut her slack because she’s in the entertainment industry, which is kinda shallow like that after all.

I have girl friends who aren’t on social media at all or who only use it for keeping in contact with close family or friends, so of course you’re not going to see as many of these non-narcissist women.

You think there are way more narcissistic women than there are because they’re the ones in your faces all over social media.

The rest of my gal pals are regular, down-to-earth, self-secure lovelies who don’t need that kind of external validation which means…

You’re probably not going to meet a good woman on social media or in a nightclub or even on a dating site because you as man are biologically wired to notice the very images that provide proof of narcissism!

And that’s the key of it all…

It is always a good idea to check, and form an opinion based on, the social media account of the woman you’re considering.

Social media won’t tell you the ‘truth of who a woman really is’ but it will provide a glimpse of who she tries to portray herself to the world.

Your first impression — you gut reaction — is right, my friend. Trust it!

Bonus signs from Fed Up Fella:

Women that are SmartPhone addicts (are constantly checking it even when on a date) and women that are posting pics daily (or more) of themselves with friends on Facebook.

For non-social media signs she’s probably a narcissist or at least damaged goods, check out these blog posts on narcissistic women and signs she’s damaged.

Walk away. But tell them why if you can.

The Sandwich approach puts the perceived criticism between two slices of compliments.

Never tell a narcissist she’s a narcissist. No one likes being insulted even if it’s true and the only thing that will do is make her dislike all men.

Instead, let her know what you’re looking for in a woman in general.

Do not worry, she will interpret this as it applies to her! Women speak hint very well.

And if she doesn’t, she’s too self-centred to change, anyway.

Sandwich example: As much as you’re an amazing woman and while I love your (insert specific quality here), I don’t think this will work out between us. I prefer a woman who doesn’t post selfies on social media very often (or whatever it is you don’t like), even though you’re beautiful inside and out and maybe other guys don’t mind it.

Do you see what I did there?

This is not a beta male simp chump offering. It is a man with standards specifying them respectfully.

p.s. If you’ve taken my WakeUP2Luv program and have a real life situation or question you want me to do a blog post (and possibly video) on details here.

p.p.s. I’m good, thanks! Got my sleep night guard apparatus thingy and it seems to be working. My spirit is up during this time of crisis because I’m annoyingly PollyANNA and focused on the positives and silver linings, even though I fully believe we’re being fibbed to at the highest levels! Grrr… Can’t do anything about the things we can’t do anything about.

Where to Meet Women Playlist:

Get a Girlfriend: Best Places to Meet Women (Dating Advice for Shy Guys)

Talk to Women! What to Say to a Girl at a Party (Dating Advice for Men)

The Best Dating App - How to Get Dates on Tinder

Pros and Cons of The Friend Zone

(Does not include all Wingmam videos for men. See playlists for specific topics.)

?Relationship and Dating Tips for Men?

The “Fed Up with Narcissistic Women in Their 40s and 50s” post was spot-on! And the warning signs are there regardless of whether she’s a social-media addict or never uses them — they’re just expressed differently.

My experience over the last two years of dating online is that the majority of women on those sites are more into themselves than into any guy — unless he’s a monied Chad 10 years their junior.

Sorry off topic but didn’t know how else to send this to you Anna, love your advice for dating and life. Still haven’t found her but not worried, you’ve helped me get women. This narcissist post nails my ex of 29 years! Ugghh can’t believe how stupid I was but adored my kids, youngest 16. Thanks, stay well and laugh your ass off and share.
Julie Andrews is a genius!
Watch “Do Re Mi – Covid 19 version” on YouTube
https://youtu.be/MMBh-eo3tvE

Naive and trusting not stupid, plus you loved your kids. The good news: she’s your EX! 🙂 AJ

Hi Anna, I would like to give you a much deserved Thanks very much! ! I was a long way from home today and had a conversation with my x and she eluded that she was planning to move away from the area, potentially taking away the most important thing in my world, with no regard for my feelings. I was beside myself, until my thoughts came to the things that you have taught me on YouTube. Awesome is the one word description that comes to mind when I think about you. Cheers Evan.

Thank you for your comment and watching my videos, Evan, and I hope you’re able to resolve this situation quickly!

Live alone with my German Shepard. Retired last year at age 56. Love Ford Model A vintage cars. And I have never tried a site like this. Take care.

First time I have done anything like this. Retired at 55. I’m 6″1 and loads of fun. Hobbies are Ford Model A vintage cars and training German Shepherds.