The reason “nice guys” finish last and good men don’t is because the difference between nice guys and good guys is … self-assurance and intention.

And now here’s a photo of a dolphin … 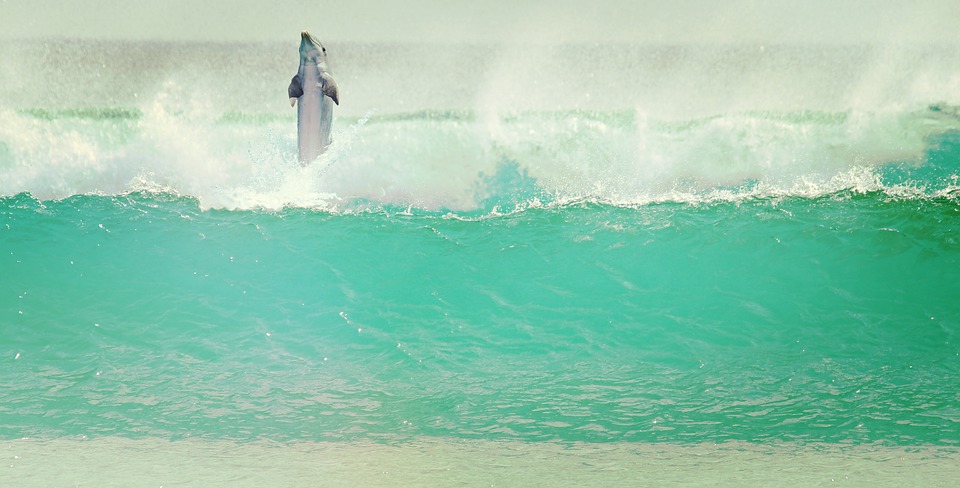 Well, yes, it is a photo of a dolphin, but there’s more to this whole nice-guys-finish-last story.

And if you don’t want to be a single guy waxing his dolphin forever, focus here fellas!

Nice Guys Finish Last because they:

Good Guys Come in First because they:

Women prefer good men over nice guys because women want to feel safe, and a man with self-assurance and integrity makes her feel safe.

A woman believes that a man with solid opinions, who can make decisions and disagree when necessary, will be able to “take care of” her, and since women’s primary need is to feel safe—emotionally and physically—his self-assurance goes a long way to achieving that goal—even if he isn’t capable of taking care of her.

Do women need to be taken care of?

In the modern age and in the Western world, not really, but despite feminism, feeling safe is still an innate need.

I don’t know a woman who doesn’t want to feel safe and (at some level) taken care of. Even if she can’t admit it (even to herself).

And this doesn’t mean a man needs bags of money. I’m not necessarily talking about that kind of “taken care of.”

The three most powerful words a man can say to a woman are, “I got this!”
Bryan Reeves

Because of sociology and/or biology, women are attuned to the most innocuous feelings of others: we are the (physically) weaker sex, “reading hint” is part of our survival mechanism.

The feminine aspect of (most) women’s nature is far more sensitive to picking up subtle signs of fake niceness over genuine goodness.

When you’re “too nice,” she won’t trust that you’re being honest and real with her and, therefore, aren’t trustworthy!

Go back to the hand lotion. Back off and whack off, Buster!

But when a man has his own opinions, and especially when he can disagree with her in a kind or even playful way, then she knows he’ll have an opinion when it really counts—like when he has an opportunity to physically protect her or verbally defend her.

Or even when she feels unsure about something and wants his opinion.

How to Go From Nice Guy to Good Man:

The backbone to my WakeUP2Luv program is a step-by-step what-to-do plan to rewrite your (love) life, inside and outside… because you can read a bazillion blogs on how to build a bicycle, but until you start putting parts together, dude, you ain’t got no ride. 😉

If you enjoyed this blog or know someone who’s got a Costco card for hand cream, please share!

Feeling extra thankful for my work? Buy my memoir or make a coffee donation here. Thank you!

And, what the heck, a playlist for y’all Costco shoppers 😉 …

ALL Women Are Turned on If You Say "This!" (SURPRISING!)

How to Deal with Emotional Baggage in Relationships (Dating Advice)

How to Handle Dominant Women (Dating Advice for Shy Men)

Why Women Try to Control Men (Dating Advice for Men)

Heard too often, “You’re a nice guy, but…”
Love is one way, Relationships are a two way street. From my experience with some women, I offer a differing opinion and I’m not allowed to have it. I MUST accept hers. I’m wrong, she’s right. Isn’t that what a lot of memes imply? That puts the fault on the women, not the guy.

Don’t agree with all this evolution stuff. Tried to make it work step by step. It falls apart. Need to find another reasoning for why women are the way they are. Pride and design perhaps.

What’s the verse almost every marriage has: 4 Love is patient, love is kind. It does not envy, it does not boast, it is not proud. 5 It does not dishonor others, it is not self-seeking, it is not easily angered, it keeps no record of wrongs. 6 Love does not delight in evil but rejoices with the truth. 7 It always protects, always trusts, always hopes, always perseveres.
BUT, if a man demonstrates these characteristics is he too nice, or is he too good?

Thanks for your comment, Ron 🙂
My initial thoughts are:
You’re not presenting your opinion respectfully or the women you’re choosing to share your differing opinions with are emotionally immature or, finally, your differences are more than opinion deep: you have misaligned values, which most people have trouble tolerating within close relationships.
We are allowed to have different opinions.
Women and men certainly are different in many ways, some of which affect how well we receive info from the opposite sex. Our brains process info differently. Most people don’t know or understand what the differences are so they expect the other person to act/react as they would. (That’s a book in itself!)
As for the “Love is” poem…that is something we would all be best striving for, but no one is perfect and we are all at different places on the path. Find people close to where you are and you’ll find more understanding.
Hope this helps!!
Anna

The scripture is correct, but the path diverges but you need to walk it like a man. BOTH have to take the same one or each take their own separately.
Don’t walk on eggshells through hell. Don’t sacrifice your pride.

Always considered myself a nice guy. Thanks for setting me wise. Now l know I’m a good man. I just misunderstood the definition.
Nice guys do finish last; that is, if they are even considered to be in the race.

Exactly! Thanks for reading, watching and commenting! 🙂

nice guys and good guys finish last in my experience. i know a guy right now who is not nice, good. caring , none of that BS and he doesnt care about any woman …and he has more women than most guys ive known. i completely endorse his approach. dont care about any of em

If that’s what makes you happy and aligns with your values then do it. It sounds like you’ve had some bad experiences (or rejection). I suggest watching the video again and try to find the happy medium between getting what you want and feeling good about how you go about it. Alpha does not equal asshole. xo AJ