6 WAYS TO FLIRT With Any Woman! DON’T Overdo This…

Make Her Really Want You Like Crazy After a SUCCESSFUL FIRST DATE!

WHY SHE EVALUATES YOU As A Long Term Relationship Prospect EARLY ON!

Why She Tests You!

The reason why she evaluates you as a long term relationship prospect early on is because she’s attracted to you.

If Ashley isn’t attracted to you there’s no need for her to evaluate your character.

But if Ashley is testing you it’s because she consciously or subconsciously is evaluating whether or not she can feel safe with you in a relationship.

Women’s primary need is to feel safe, emotionally and physically.

If Ashley has zero attraction to you, she’s not going to see you in her intimate future.

Even if a girl is not ready for a relationship, she’ll still instinctively test you if her attraction level is a 6 or higher.

Unless you’re Chad and she’s in her try-the-ice-cream-flavours phase.

The younger she is and/or the more she’s just into hookups, the more she’ll be affected by a man’s physical qualities.

If she’s in her hoe phase, she’s as shallow as any guy looking to hook up.

But if Ashley is ready for or open to a relationship, she has a different—less shallow—set of standards for her to feel safe.

Why She Evaluates You 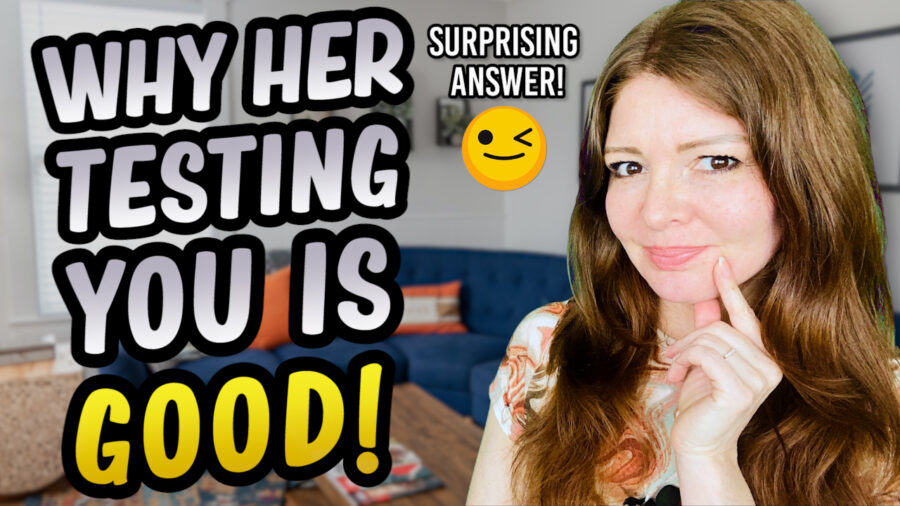 Watch the video here or click the image above!

Ashley is a high value woman: she’s beautiful, kind, easygoing and fun to be with.

She’s dated a few men who were nice to look at but either weren’t ready to settle down or didn’t treat her right.

They were in their taste-the-ice-cream phase.

Either they weren’t right or the timing wasn’t right.

But we all learn by experience and in Ashley’s world, men either didn’t want to progress in the relationship or they cheated on her.

Naturally, because of her experience, Ashley didn’t trust men.

But subconsciously, Ashley didn’t trust herself to choose the right man.

Ashley knew she needed to find out more about a guy before getting too involved.

She wanted a solid, loyal guy but she knew if she asked, “Are you loyal?” every guy would say, “Yes.”

They always had in the past even when that turned out not to be true.

Why She Tests You

(Maybe you’ve have had the same experience with a woman!)

By the time Ashley met John, who really is a good guy, she wasn’t sure who to trust.

In order to feel safe, Ashley became more subtle about the way she asked certain questions…

…how she evaluated a potential partner.

Instead of asking if John was loyal, she asked if he would spend Friday night with her instead of his buddies he’d made plans with.

When John said he wouldn’t ditch the boys, she asked if she could join them.

Again, John said, “No.” It was his regular pool night with his guy friends.

How to Handle Her Tests

We’ve all had bad experiences that caused some insecurity.

Or! We’ve seen unhealthy examples in our parents or primary caregivers in childhood.

Because John is a good guy and knew Ashley had some bad experiences in the past, he handled this test firmly but gently.

He reassured Ashley, “Don’t worry, babe, there’s no ladies allowed. Besides you’re the only woman in my world.”

And, handling her “test” this way was also a way for John to test Ashley!

How would she react to his boundaries.

If Ashley is an emotionally healthy woman, even if she feels disappointed or a little worried, she’ll appreciate John’s reassurance and his dedication to plans made.

Most people are somewhere in between emotionally healthy and unhealthy when it comes to intimate relationships.

They don’t teach this stuff in school.

It takes awhile to learn how to “do” relationships and we all come into them with our own baggage.

In which case, while processing her feelings, Ashley might act a little cool toward John.

But instead of ditching Ashley right away, he addresses it.

“You’re an amazing girl, Ashley, and I think our relationship has potential… if we can work on you trusting me.”

John can say this because he knows he can get another woman if it doesn’t work out with Ashley.

And, if she’s really emotionally unhealthy, she may freak out or punish him for not getting her way, in which case John will have non problem saying, “Buh-bye!”

Most women aren’t consciously or purposefully testing you.

Often, most general interactions aren’t outright tests at all.

Typically, she’s not thinking about testing or evaluating you and pays attention only when something sets off an alarm bell in her psyche.

Again, usually related to some past experience she’s had—or seen in her parents.

(Men will sometimes experience this as well after they’ve had enough painful experiences with women to pay attention for red flags.)

Sometimes, a guy has had so many bad experiences he’ll become jaded toward all women.

And you may not see flags because you’d never in your life consider doing such a thing to someone you care about.

Well, there are some Ashley’s out there who’ve been through the same thing with not-so-good guys.

If you can stay grounded, amused or at least curious, whatever she does won’t affect you and the side effect is she’ll feel safe with you.

why she evaluates you, why she tests you