After you download my Instant Confidence Formula Cheatsheet, you'll be directed to a private page with a special offer that isn't available anywhere else!

After you download my Instant Confidence Formula Cheatsheet, you'll be directed to a private page with a special offer that isn't available anywhere else!

Have you ever seen a romantic comedy aka Chick Flick?

You know how at the beginning, John (our story's hero) is single and lonely? His life is pretty good in most ways, but he's missing the one thing that'll make everything, just, better: a girlfriend. A really amazing girlfriend.

Maybe John is feeling hopeless. He's a lone wolf. He works mostly with men. He doesn't understand women or has social anxiety or messes up his words with them.

Maybe you can kinda relate?

Watching the story unfold, we see that even though John makes a decent living as an engineer and works hard and has some good buddies that he hangs with at the local pub, he's pretty awkward around the kind of women he really likes.

And since John works mostly with men, he feels out of sorts approaching women. He doesn't know what to say when a great gal somehow stumbles into his space. He usually fumbles the ball and ends up feeling like a fool. (This is the part in the movie where we    the audience    half looks away because it's so. damn. awkward!)

John yearns for a woman who he can call his best friend. One who'll adore him for who he is. He wants that gut-punch-butterfly-soul-connection with a lady he wants to spend the rest of his life with.

So, what does John do to fix his solo situation and mend his aching heart?

He spends his free time in the outdoors: hiking, fishing, maybe camping or hunting. He recharges his batteries in nature where he feels somehow understood and accepted. Or he hangs at home reading Wired and watching "dating advice" YouTube videos.

But guess what guys?

John's dream girl    the one he can't wait to get home to, the one he looks forward to holding in his arms, the one who just makes life better by being by his side    yeah, that elusive unicorn, well, she ain't waiting in the woods for John.

She's in the Love Meadow and John has no clue where that is!

So, he bides his time online watching videos, working out or working way too much.

Wingmam will provide the map to the Love Meadow!

Can you relate to John's story? Maybe a little too much??

I'm Anna aka Wingmam, and I help single guys just like John (you) rewrite their love script!

You can fast track to the fun bits of your happy ending without all that struggle. If you're a Stuck Chuck (or John or Mike or Ali), I'll help get you unstuck and coupled up!

Be the Hero. Slay the Dragon. Get the Girl.

Are you sick and tired of being lonely and single??

You're in the right place!

You Didn't Land On This Page By Accident!

And if you're really ready to settle down without settling, rewrite your love life and get a girlfriend of your dreams, Wingmam is your solution.

Wingmam's WakeUP2Luv    GET A GIRLFRIEND Program is a simple step-by-step study-at-home-in-your-PJs map to the Love Meadow! It gives you the strategies you need and the step-by-step action plan to build the confidence, skills and practices that guarantee the result you want.

And there's ongoing support! I'm here for you along the way.

Get your sword, ready, Love Warrior! 😉

Let's do this!
xo
Anna

A few words from customers ...

"You gave me some good advice years ago that helped with my perspective on dating. Since then I've had healthier relationships with women and am now getting engaged to be married in December. Just wanted to say thanks."

"I definitely feel something shifted inside me, I feel greater confidence and I can see and feel that I am attracting more attention from the opposite sex."

"I enjoyed how easy it was to listen to the audio. You had me engaged and committed throughout. I like the wholeness of the program..." 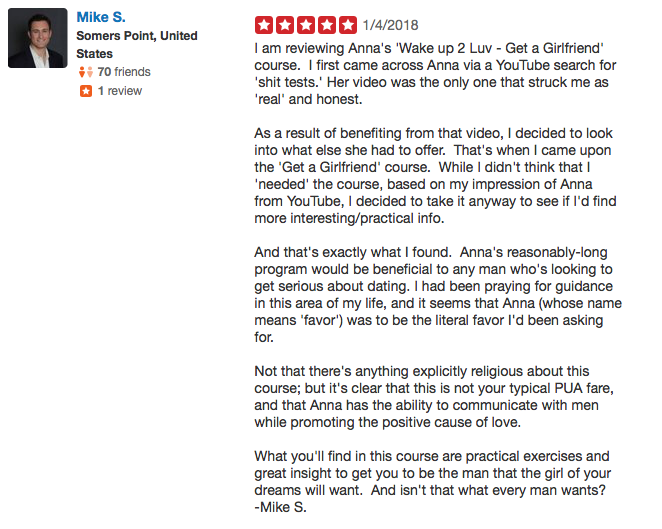 Check Out Our Latest Posts

﻿Where should I send the ﻿FREE cheatsheet to?﻿