How to Escape the Friend Zone in 5 Steps

“Hey! How was your soccer game?” Christina asks with a bright smile on her face.

“Yes …” Christina replies. She chokes back a sob as the word escapes her mouth.

“I don’t understand why you’re with him …”

“I know …” Christina says with an all too familiar sound of disappointment.

David is 6 feet 2 inches and 180 pounds of solid asshole with a side of degenerate. He’s the classic high school quarterback bully who loves to pick on anyone weaker than him and enjoys mistreating women. Yet Christina is in love with him. 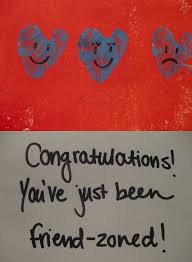 Christina, on the other hand, is the closest thing you can find to an angel earth. She’s sweet, considerate and gorgeous. Her flowing brunette air falls upon her crestfallen face hiding her jade eyes, which are welling up with tears.

She proceeds to talk about how David has been ignoring her lately.

Why is she in love with that jerk anyway? If only she could see that someone who actually cares about her and would love her back is standing right in front of her …
Ah, the infamous friend zone—a place where the disillusioned romantics come to fantasize about their unrequited love becoming not so unrequited.

Many of us have experienced it. But the question is, how do you escape it?

First of all, are you even in the friendzone?

Sometimes guys think that they’re in the friendzone, but, in actuality, the girl is just waiting to be asked out.

So how do you find out if you’re in the friend zone or not?

If you’ve never asked your crush out before, then there’s a chance that she’d gladly go on a date with you if you just made a move.

So, if you haven’t already, pull the trigger and ask her out on a date!

But it isn’t always the case that she’d gladly go on a date. If you’ve already asked her out multiple times and she’s crushed your heart along with your hopes and dreams, don’t lose faith! Read on!

Here are the steps for escaping the friend zone:

Let me explain each of these steps in detail:

What sets the nice guys apart from the bad boys is something called breaking rapport.

I write about breaking rapport in detail in “How to Approach a Girl You Don’t Know,” but here’s a quick rundown on the topic.

Breaking rapport means that you’re saying or doing something a bit risqué, edgy and perhaps politically incorrect, which demonstrates that you don’t really give a fuck.

Why are women attracted to this?

Because guys who don’t give a fuck have the nerve to look out for themselves.

Biologically, women perceive this as an emotional signal that the guy is assertive enough to fend off other competitors in the wild.

However, you can still break rapport without being a bully. You can do so socially by playfully teasing her.

For example, if she’s just finished working out, you could say, “Ew, you’re so sweaty! Gross!” Yes, it’s immature, but most girls love to bring out their inner child.

If you’re in the friend zone, chances are that you rarely touch her. Even when you’re talking, you probably have a 5-foot space between you two.

Women can assess a man based on his touch. A man who is confident with his physicality will immediately make women feel safe around him; however, a man who is hesitant or is overly aggressively will feel creepy or threatening to her.

So, how do you touch her in a way that feels safe for her?

First of all, you’re going to have to get close to her. This seems obvious, but I’ve seen some guys try to lunge quickly across a 10-foot gap.

Which brings me to my next point. Don’t rush it. No need to break speed records here. Plus, when you don’t rush, you can see whether she’s responding positively or negatively. If she’s leaning away, then slow it down. If she’s not backing away, however, then keep going.

Finally, although you don’t want to rush, you also don’t want to be indecisive. Do everything in one smooth movement. Don’t be jerky. When you decide you want to touch her, just man up and do it.

When and where do you touch her?

An easy place to start is when you’re making a point or when you make her laugh, just touch her lightly on the forearm or tricep area. If you’re whispering something into her ear, you can also touch the small of her back.

If the idea of touching her makes you feel nervous, remember, worst case, she just backs away, and you can try again later. Or she pulls out the pepper spray. Don’t worry, it only stings for a few hours.

You have to set boundaries for yourself and your time.

First of all, think about how you want to spend your time. Go through and write down your priorities.

For example, gym, work and family might be your Top 3. Now, anytime you’re engaged in an activity involving one of these priorities, don’t allow yourself to be sidetracked by your crush.

The best way to do this is to slide your phone into airplane mode during these activities. If that’s not doable for you (which is usually just an excuse …), then just let her text or call go when you’re busy.

Resist the urge to pick up just to have her rant on about her emotional turmoil while you sit there and listen politely and intermittently breathing “I understand” into the phone to acknowledge that you’re still on the line.

And when you are hanging out with her and she tries to talk about things that you don’t want to talk about, just ask directly, “Can we not talk about this right now?” She might not like you in that moment, but she will respect you. If she reacts poorly to you standing up for yourself, don’t relent. Hold fast, soldier, and weather the storm.

When you’re hanging out with her in a group setting, don’t talk to her the entire time. Make sure you’re having fun with the entire group.

When you’re just paying attention to her, it’s obvious to her and the entire group that you’re an orbiter. What’s an orbiter? Someone who hangs around their crush in the hopes of getting the scraps of his or her attention. Don’t be that guy.

By being more social, she will see that you’re not just going to volunteer all of your attention towards her. As your neediness fades away, she’ll feel less pressure when she’s hanging around you. The key to doing this is to detach yourself, which brings us to the last step…

Stop obsessing over her so much. Chances are, if you’re reading this article, you’re running fantasies through your head about how you’re going to talk to your crush tomorrow and make her realize what she’s been missing out on, like the side-by-side realities versus expectations scene in 500 Days of Summer where Tom Hansen fantasizes about courting Summer Finn at her evening rooftop party but instead finds her sharing news to her friends about her recent engagement. Yep. Reality’s a bitch.

So, if you go on thinking, obsessing and romanticizing your happily-ever-after ending with some girl who just views you as a heavy bag for her emotional struggles, then I can guarantee you that you’ll never be with her.

Because if you’re too attached to a single girl, then you’re pushing her away with your neediness and obsession.

Reality Transurfing, Vadim Zeland says, “Excess potential is created by mental energy when too much importance is given to a particular object.”

When there’s too much excess potential, balancing forces ensure that you’ll never get that object.

Basically, when you become attached to the outcome, in this case getting your girl, you’re guaranteeing yourself a life filled with platonic side hugs and hearing the words “aww, you’re so sweet!” after listening to your crush ramble on about some jerk who could care less about her.

So, the next question is, how do you detach from the outcome?

The best way is to objectify your emotions. Write down the answers to the following questions:

For example, let’s say I feel angry whenever my crush rambles on about her ex to me. The reason I feel this way is because I’m frustrated that she cares so much about someone who doesn’t care about her and because she doesn’t see me as a viable option.

Ultimately, I’m frustrated because she won’t give me a chance. I also used to feel this way when my basketball coach would bench me or when I would get picked last for kickball. I’ve noticed that throughout my life, I hate when people undervalue me.

Let’s go even deeper. Why do people undervalue me? Because I’m not assertive, and I don’t stand up for myself. Sometimes I’m afraid to express how I genuinely feel about something. So, how can I change my behaviour to earn more respect and demonstrate my value? Be more unfiltered and assertive.

By going through this process, your mind is released from past emotional trauma and is now geared towards accepting things for how they are and moving on.

Here is the ultimate test to see whether you’re truly detached:

Can you imagine life without her?

If you can accept a reality where you never get to see your crush again, then you’re finally detached.

As soon as you move on from your fantasies about your crush finally coming around to “seeing you for who you are,” then she will be the one to come to you.

AJ Note: Wow, hey! A lot of wisdom in these examples. I’d love to know which part impacted you most! Let me know in the comments!