She might be alpha dominant if she has three or more of these signs she’s a masculine woman even if she’s wearing a frilly dress!

And if she does have more than three of these traits, you’ll want to know how to handle a dominant woman or you’ll end up being the beta in the relationship.

Let’s do a countdown…

She’s always telling you what to do and how to do it.

Even if she has no authority in the matter.

Even if you have complete authority in the matter.

Her favourite phrase is, “My way is better.”

She won’t let you or anyone else help her out.

Even when it doesn’t make sense not to accept help.

Even when it causes her inconvenience or angst to not accept help.

Example: She’d rather risk putting her back out than let someone, especially a man, help her lift that heavy thing.

Her favourite phrase is, “No, I got it.” #independent

7 She Asks You Out

There’s no hinting or subtleness, she just straight up says with certainty, “Let’s go on a date” or “Do you want to come home with me?”

Now, I know a lot of y’all fellas think you’d prefer if women asked you out more, and I get that.

But, as mentioned, if she’s got more than three of these signs she’s a masculine woman, then get ready to put your balls in her purse, Sir.

I know a young lady like this and she’s always wondering why she ends up with men who are “weak and scared.”

When a woman takes the reigns from the get go, she’ll keep the reigns because she’d been allowed to take the lead.

Ideally, what you really want—if you don’t want a dominant, masculine woman—is for women to give really really big hints like…

“We should hang out sometime.”

Or, “If you asked me out on a date, I might not say ‘no’” accompanied by giggles and exaggerated flirty lash fluttering.

6 She Believes in Equality

You may appreciate this at the beginning, but again, if you accept this you’ll never lead the relationship and everything may become a negotiation just for the sake of it.

Her favourite phrase, “Anything you can do, I can do…for myself.”

This kind of woman emasculates men, albeit usually unwittingly, by taking away your ability to protect and provide for her in small but meaningful ways.

5 She Wears the Pants in the Family

Even when not at work, she prefers jeans or pants but—key point—doesn’t balance out masculine clothing with any feminine staples like delicate jewelry, frills, florals, lace or silky things because she doesn’t own any of those things.

Her essentials are comfortable shoes and masculine blazers; or sweats.

4 She Has Masculine Style

Along the same lines, she has masculine style.

What is masculine style?

Well, if you could put it on a guy and not think he’s gay, that’s what I mean.

And, she’s not a hippy or a lesbian.

Another one of the signs she’s a masculine woman is she works more than 40 hours a week.

Because she’s competitive or driven.

Not because she needs the money.

Her favourite phrase is, “Smash the glass ceiling.”

She’s a Manager / Director / CEO living large and in charge.

Reality land shows that masculine traits are required to get to these top level positions.

If she tells you her favourite position is CEO and she is serious—red flag!

Being able to plan, direct, compete, lead, delegate, pursue, accomplish and achieve all in a timely manner are qualities required to excel in the business world.

The vast majority of women in these fields find it challenging at best to leave the boss babe in the boardroom.

If Babe’s favourite expression is a finger snap or two finger hand roll indicating, “Hurry up” or “Sum up” that’s definitely one of the signs she’s a masculine woman!

Her favourite phrase, “The patriarchy.”

Also, watch my video on how to handle dominant women and should you date a first wave feminist.

Here are a few extra tips I agree with from one of the Wingmam Fam (via a pubic comment on the video): 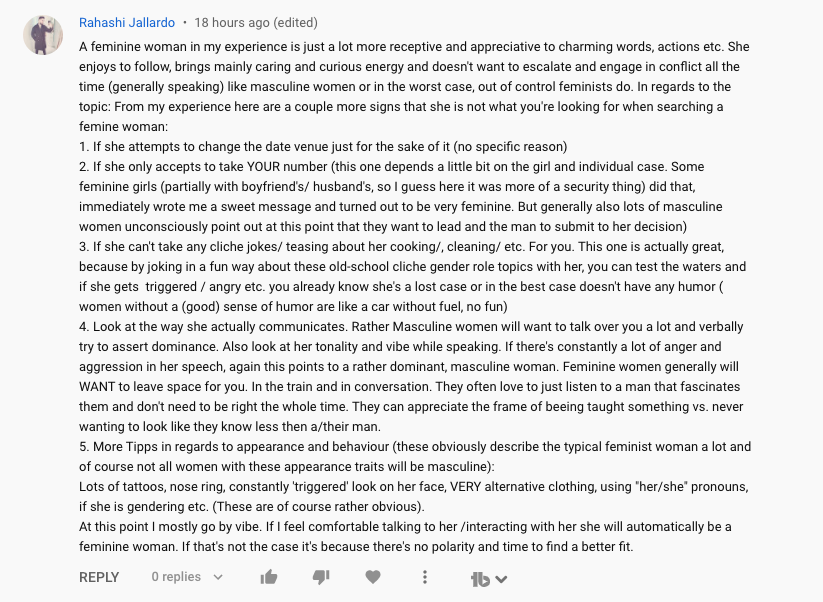 Wow. You have just described my wife.

Interesting. Masculine traits aren’t inherently bad when displayed by a woman but there may be some areas you may want to be different. Talk to her about those areas if they’re important to you. If they’re not really dealbreakers, remember there are likely things about you she doesn’t prefer but accepts because she loves you. 🙂

Thank you Anna. You have been an inspiration for my relationships with ladies. Respectfully, Rex

You’re welcome and thank you for your loyalty to my channel! 🙂

Thanks for the clarity – Discriminating the various meanings for our sexual polarity.

Your comment “harming others” is wrong.
Trending seems, our animal nature tends automatically to respond with harm for perceived harm. And this is especially so for alphas. I note that the word “alpha” for describing human behavior is taken from its exhibition in some animal species. Noted is that the alpha male horse gets all the females and until one of the younger males eventually wins combat, that male is the only male among horses in that group getting any sex. I think a lot of our so-called human behavior is actually animal behavior.

Thank you for sharing your knowledge (and for reading my blogs)! 🙂

Thank you Anna for all your insite & wisdom!!!I appreciate all your tips & humor!!! Xo