6 WAYS TO FLIRT With Any Woman! DON’T Overdo This…

Make Her Really Want You Like Crazy After a SUCCESSFUL FIRST DATE!

Top 3 SECRETS To Change How She Feels About You!

Top 3 SECRETS To Change How She Feels About You

My top 3 secrets to change how she feels about you feel counterintuitive, especially if you’re a nice guy.

Watch the video by clicking here: Top 3 Secrets To Change How She Feels About You!

But they’re the only way to get and keep your Ashley!

Tim meets Ashley, an amazing girl who seems like everything he wants in a woman.

She’s fun, funny, easy-going, and makes him feel like he can be himself around her.

Tim’s so relieved and happy about how easy it feels to be around her.

She laughs at his jokes, quickly replies to his texts, and is anxious to spend time with him.

But almost suddenly her demeanor starts to change.

She starts to get less talkative and quieter around Tim, doesn’t reply quite as quickly to his texts and her humour is a bit mean-spirited.

Panic sets in as Tim feels Ashley pulling away and doesn’t know what to do.

He wonders if he did something wrong but doesn’t know what it could be.

They seemed to agree on everything, he messages her “Good Morning, Beautiful!” every day and replies to her messages right away, and he’s always up for getting together with her.

Nothing makes sense and feeling desperate he asks her, “Did I do something wrong?”

When she doesn’t reply for a day, he follows up with, “Hey, what’s up?”

Trying to pretend everything is fine.

Tim emotionally over-invested in Ashley and the relationship and he did it too soon.

To Change How She Feels About You…

You cannot emotionally over-invest too soon.

In fact, you shouldn’t emotionally overinvest ever.

That’s not to say you don’t invest at all.

But when you put too much emotional value on a woman too soon, she’ll start to feel smothered.

If a woman feels like she is relenting to your needy attachment to her, it won’t feel like a choice for them because…

…when a man acts needy, she feels he’s not choosing her—who she really is—but that he’ll take whoever shows up to take him.

My Top 3 Secrets to Change How She Feels About You

“Anna, those sound like manipulative bad boy tactics. I’m not into games. I’m out.”

If you can relate to Tim, you need to hear this.

I told you these secrets would seem counter-intuitive, but they’ll make sense in a moment.

When you meet someone who seems to have all the same ideas, opinions, and philosophies it can feel like you’ve met your soul mate.

However, women instinctively know you’re not always going to agree on everything.

This means she subconsciously needs to know how you’ll handle that.

And she’ll unconsciously worry that if you don’t have your own separate ideas, opinions, and philosophies she’ll have to lead the relationship.

Even if you want an alpha woman, she wants to know you have an opinion that she can consider.

There’s also another reason why you need to disagree with her, which all three of these secrets change how she feels about you if you tap into them.

More on that in a moment, but let’s look at #2 of my top 3 secrets to change how she feels about you…

You have to give them enough of a taste to whet their appetite, but you don’t want to stuff them to the point of feeling sick.

Women are more attracted to men who’s feelings are unclear about them.

Which means you need to let her chase you more than you pursue her.

If you’re not sure what the difference is between chasing and pursuing, you definitely want to watch my video on Chasing vs Pursuing. 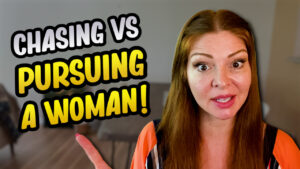 If Ashely is really attracted to Tim, she’ll love those good morning texts…

… but not if Tim always initiates all the rest of the communications.

If you’re in a solid frame of mind, this will come naturally.

But if not, if you tend to initiate way too often, you’ll want to watch my video on How Often to Text Her which gives you a rule of thumb.

Also, along the lines of leaving her wanting more is…

If you’re always available whenever she wants, she will feel like she holds the power in the relationship.

And, if you’re always available for her, by default that means you don’t have a life.

If you don’t have a life, she unconsciously knows there’s no competition for you.

If you do have value in her eyes, she’ll pay more attention to you if she knows you might be out in the world being amazing potentially around other fillies.

Not only that but if you don’t have a life, she knows she will have to be your life.

So, not only does she have no competition, she’ll feel smothered.

Because, and here’s where we tie it all together…

What happens when you work hard for something?

When you finally get it, you appreciate it all the more.

And, the more you work toward it, the more ingrained it becomes that it was your choice, that you want it.

If she has to do more of the chasing, she’s going to feel like she’s the one choosing you.

She’ll feel like when she gets you, she’s won the prize.

That doesn’t mean you ignore her!

You’ve got to give her enough to know what she’ll win when she does get you.

So if you’re the guy who went too far the other way and neglected your Ashley, then you’ll want to watch my video, Should You Ignore Women?

You’ll be surprised by what I say!

And if you want to be a man who never has to consider “rules of thumb” because beautiful women are automatically drawn to you, maybe it’s time to WakeUP2Luv… Click here!

secrets to change how she feels about you